A visitor to EQ Office’s newly repositioned building, CANVAS Costa Mesa, will immediately understand what inspired the building’s name. Newly infused with a spirit of art and community, the vibrant exteriors of these two granite and brick low-rise buildings make a statement among the corporate campuses on the east side of the city.

An art program in an office building can attract prospective tenants, by showing them that they are joining a thriving workplace culture.

Three exterior walls now boast murals by well-known and upcoming street muralists. On Bristol Street, the main thoroughfare that runs through the city, the world-renowned muralist Aaron De La Cruz has painted one of his signature designs, featuring interdimensional black shapes and symbols. A mural by the artist Charmaine Olivia on another wall features Calypso, the goddess-nymph who detained the Greek hero Odysseus on the mythical island of Ogygia. She has a provocative gaze and long blue hair that flows down her shoulders into rolling ocean waves. A third mural, on a parking garage, is by a local artist, Damin Lujan (aka Zao One). It features multicolored, three-dimensional blocks emblazoned with the words: “City of the Arts.” 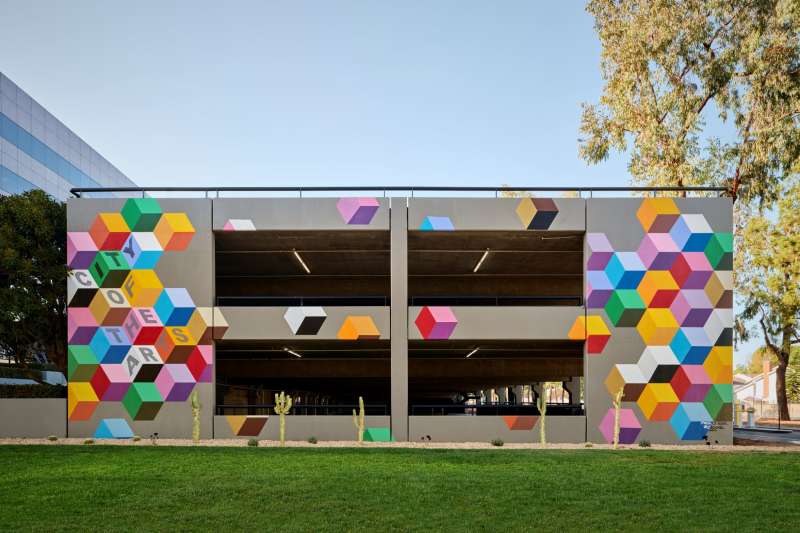 Mural: City of the Arts, by Zao One | Photographer: Brandon Shigeta

“We created this interactive and vibrant ground floor,” said Brendan McCracken, an SVP-Portfolio Director for EQ Office based in California. “By bringing in these artists, we’re providing tenants with an immersive experience. We’re adding character to the new building that makes it stand out, by embracing Costa Mesa’s cool art and culture vibe.”

Today’s building design is less about constructing monuments with extensive square footage, and more about creating spaces that support the workplace culture and community of the talent working within the building’s walls. An art program in an office building is likely to attract prospective tenants, by showing them that they’re joining a thriving culture and community. It also reflects a commitment to community values, which can help the tenant companies attract and retain talent. Since many of the murals are external and immediately visible to the public, they welcome all who pass by and they communicate that the building is open for anyone to visit. In this way, CANVAS helps support public art for all the residents of Costa Mesa. 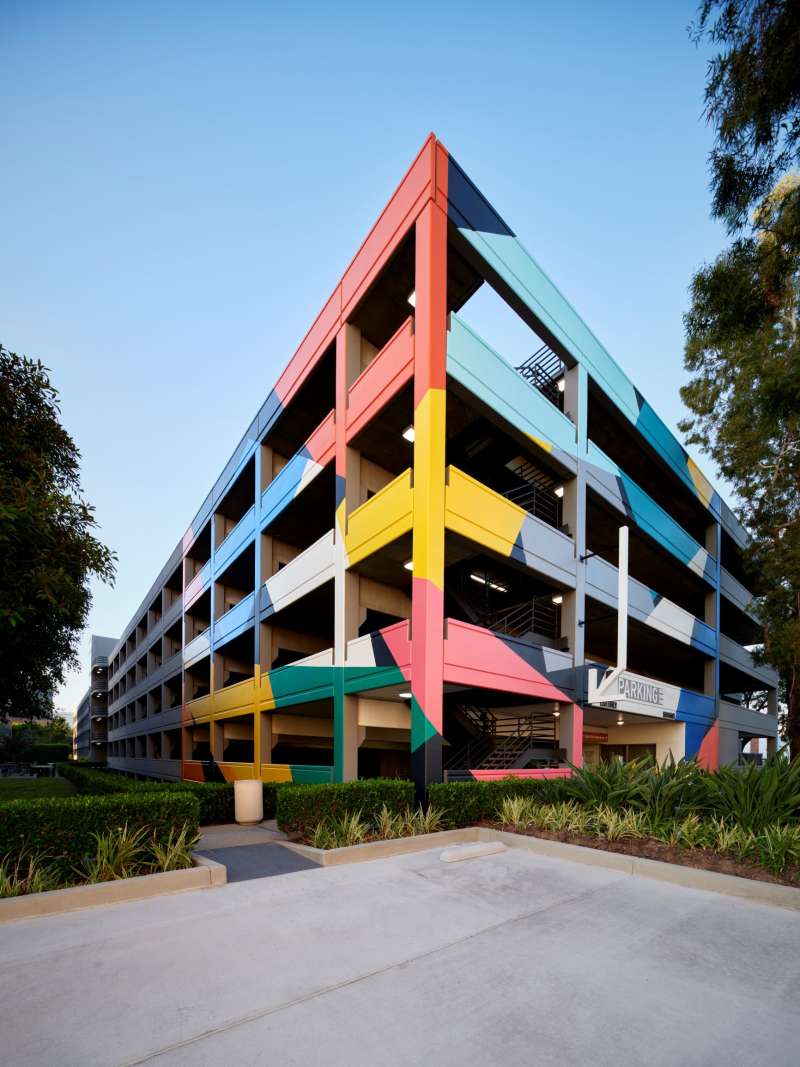 Art Promotes Creativity and Inspiration in the Workplace

Public art can elevate the entire ecosystem of a building and the community in which it’s situated. A recent research report, Examining the State of the Art Consulting and Curating Business, produced by NINE dot ARTS, found that almost two-thirds of respondents (including real estate professionals, architects and designers) said that it is “absolutely critical” or “very important” that art express the brand, mission and vision of a company.

Similarly, another study from the University of Exeter in the United Kingdom by Professor Alexander Haslam and Dr. Craig Knight found that art in the office promotes productivity, creativity and reduces stress.

In the case of CANVAS’ public art program, the goal is to inspire tenants by connecting the building to the larger community of Costa Mesa, which is known as the City of the Arts. “We see this project as a blank canvas for companies to come and paint their own culture for employees,” said McCracken.

Costa Mesa’s local art scene has been growing for a number of years, as more artists move into town from Los Angeles. In 2017, when the artist Shepard Fairey painted a mural on Baker Block, a live-work space downtown, more street artists started coming to the area. This growing street art scene is a prime reason for the vision for CANVAS. “We took the community and literally splashed it against our walls,” said Kristen Runner, EQ's Product Marketing Manager. 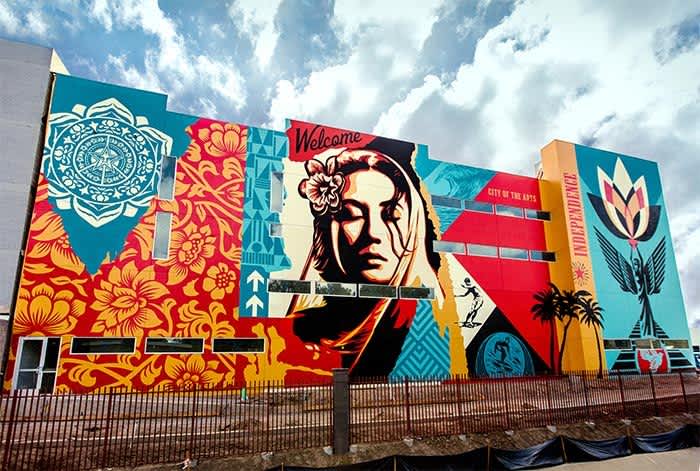 In 2017, the artist Shepard Fairey painted a mural on Baker Block, a live-work space in downtown Costa Mesa.

In order to achieve their vision of “Building as Gallery,” the EQ Office team worked with Costa Mesa’s Cultural Arts Committee and tapped the services of Clarissa Butler of CB Creative. Butler is a local curator with deep connections in the SoCal art scene. Early in her career, she worked for URB, the urban music magazine in Los Angeles, and met local artists like Shepard Fairey, Estevan Oriol and OG Slick. “There was something about the rebellion and the art community that really attracted me to it,” she said.

In 2011, the Museum of Contemporary Art, Los Angeles curated and produced a phenomenal show, “Art in the Streets,” which featured many contemporary graffiti artists. The show pushed street art into the mainstream, and that inspired Butler to go into art curation. “Clarissa has been an incredible asset in accomplishing our vision by curating and connecting us with local artists,” said EQ’s McCracken. “She is the local arts vibe.”

The team at CANVAS chose 16 spaces where “art moments” should happen, and then Butler began tapping her network of artists to fill them. She began the project by working with local artisans to source most of the furniture for CANVAS. “We’re not just picking things out of a catalog,” she said. “Everything has an ‘Oh, that's cool!’ moment — or the story behind it is really interesting.”

For example, Butler and the team designed the tables in CANVAS’ “Marketing Room” by sourcing old electric spools from Southern California Edison and turning them into the bases of the room’s meeting tables. “We went around town and collected stickers from different local shops and decorated the spools with stickers,” she said. “That's something that you'll see all over Costa Mesa: Everyone slaps stickers all over everything.”

Costa Mesa’s emerging street-artist scene inspired Butler to draw on her network of local street artists. “We wanted to incorporate local artists that didn’t have as much exposure and bring in some big, notorious names like Aaron De La Cruz, but also local artists like Damin Lujan (aka Zao One), who worked with Shepard Fairey on the Baker Block mural project,” she said.

When the team made its presentation about CANVAS to the city of Costa Mesa, the local Cultural Arts Committee asked whether the project could incorporate the “City of the Arts” logo as part of its program. “We thought this would be the perfect opportunity for Damin’s mural,” said Butler. “He literally gets up on a ladder and free-handed the design, and then spray-painted it. He refused to use any lifts or scaffolding.” 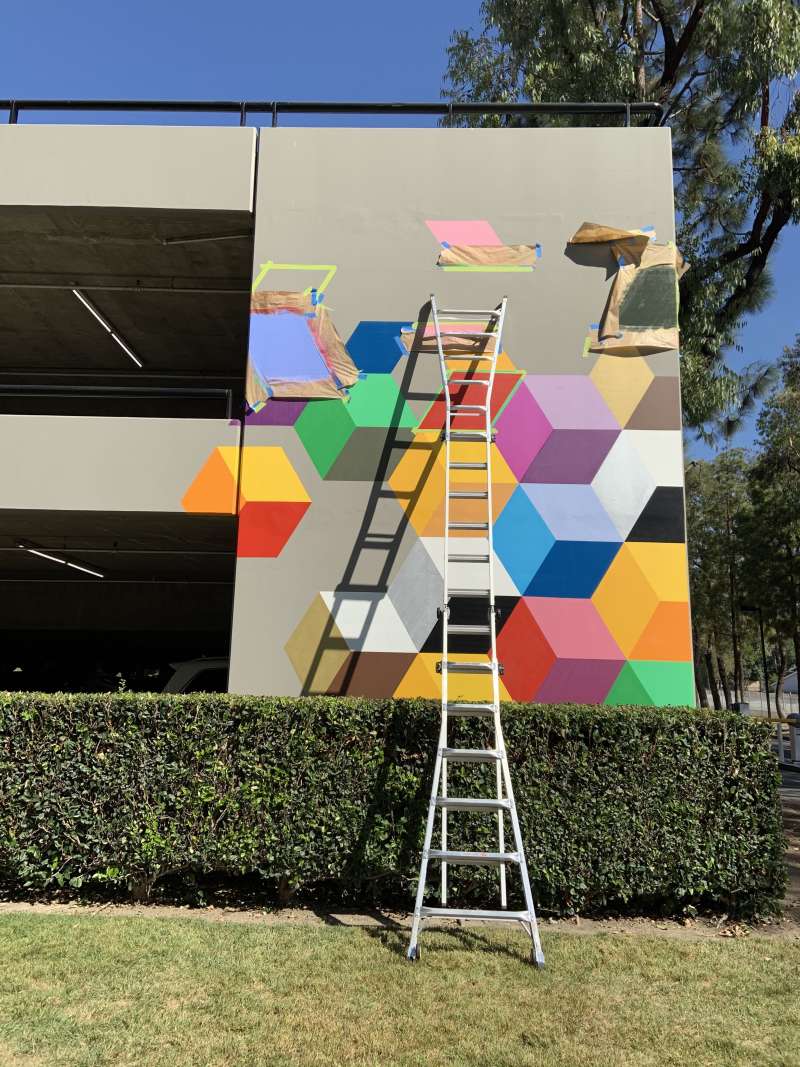 Damin Lujan (aka Zao One) went up a ladder to free-hand his design, then spray-painted it.

In one of the spaces, Butler worked with the artist Augustine Kofie to create a mural on a lenticular wall, a wall built in a zigzag design that allows passers-by to see one image when they walk into the building and another when they walk out. “He calls his artwork style ‘vintage futurism,’” Butler said. “He actually worked with vintage rulers from Costa Mesa to frame his pieces.” 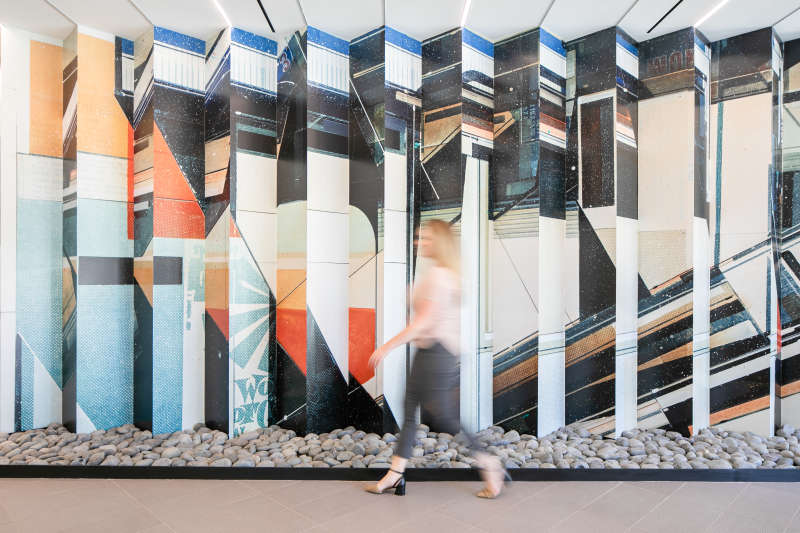 When the construction of CANVAS is complete, 20 pieces of art will be in place. Some of the pieces are commissions, and some are existing pieces that the team curated specifically for the spaces. As you might imagine, turning a building into a gallery and acting as a bridge to local artists has had its challenges. As Butler explained, “Art is subjective, and good art will provoke, so it’s hard to satisfy everyone.” For example, the frank sensuality of Charmaine Olivia’s Calypso mural has raised some eyebrows. In the end, though, that is all part of the goal: to provide food for thought for the CANVAS community and all Costa Mesa, and to inspire new ideas. 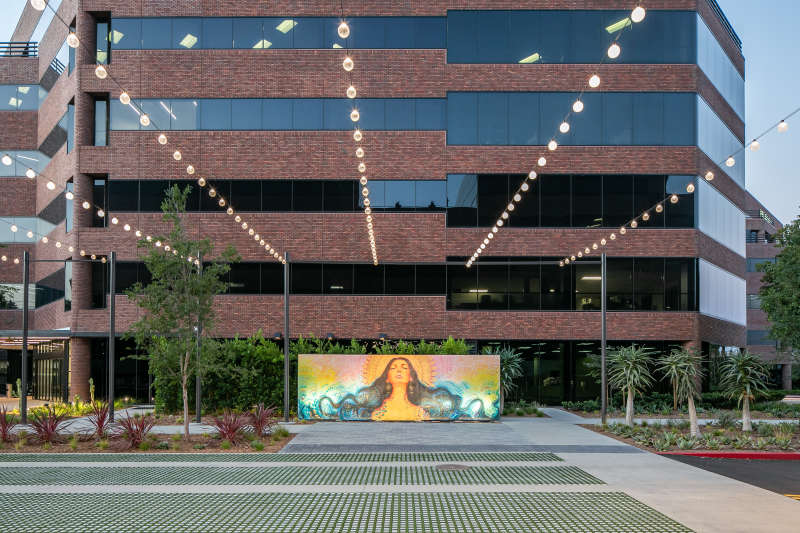 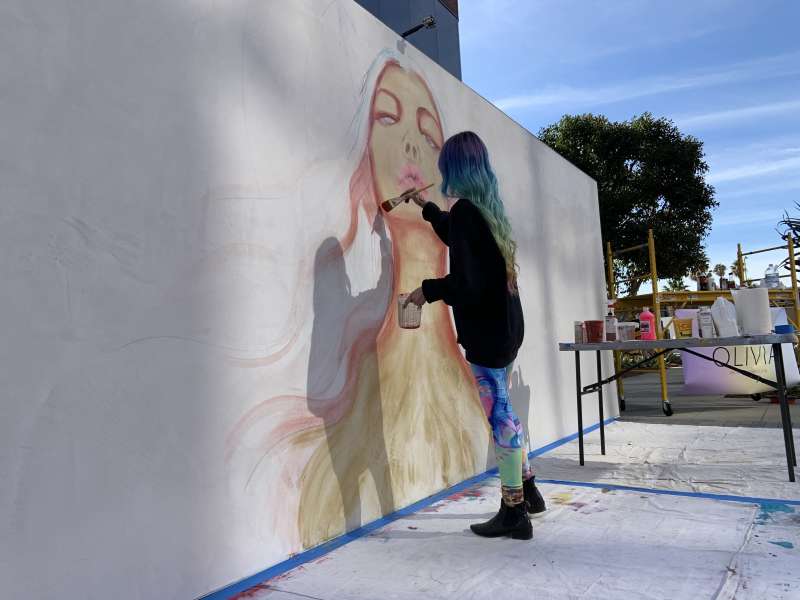